Lisbon circa 1572
Lisbon is one of the oldest cities in the world, older other European capitals such as London, Paris and Rome by hundreds of years. It was settled trough the centuries by diverse people and cultures and that’s why almost each time a new underground construction or infrastructure is initiated in Lisbon’s historical centre it has most likely to be interrupted so the archaeologists can identify and preserve the found remains. 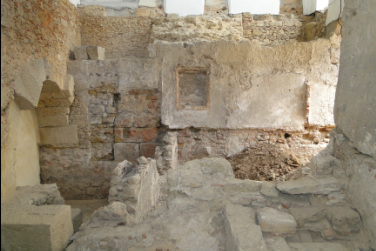 Roman Theatre Ruins -Alfama - Lisbon
Lisbon was settled during at least the Neolithic period by Pre-Celtic tribes in the north margin of the river Tagus, who left religious and funerary stone structures like dolmens and menhirs, which still exist in the region. In the first millennium BC the Celts invaded, mixing with the existing population.

Although archaeological findings suggest there were also Phoenician influences dating back to 1200 BC, modern historians believe that those were mainly due to commercial relations with the autochthonous settlement.

Olissipo, as Lisbon was known at the time among Latin speakers, was integrated in 2nd century BC into the Roman province of Lusitania under the name Felicitas Julia. Romans have built a number of facilities such as a wall around the settlement, a great theatre; the Cassian Baths; several temples, a large necropolis; a large forum as well as residential buildings. Some of them are preserved such as the Baths (can be visited with limitations since it is within downtown sewerage system) or the fortified walls and others, such as the Theatre, are presently being excavated. Still other identified Roman remains are scattered beneath old Lisbon, often under existing historical buildings.

Roman baths ruins beneath modern Lisbon
Olissipo became mostly Christian after it was the religion adopted by the Roman Empire. By the time of the Fall of Rome, it had become an important Christian centre.

Following the collapse of the Roman Empire the city was invaded in the 5th century by successive Germanic tribes, which ultimately occupied all of the Iberian Peninsula. Lisbon was then called Ulishbona.

On the 8th century Lisbon was taken by Muslim forces, mostly Berbers from North Africa and Arabs from North Africa and the Middle East, who established administrative control and started to rebuild the city according to their lifestyle, including mosques, houses and a new city wall. During those times Christians and Jews were allowed to keep their religion under a status in which they were substantially equal to Muslims in terms of property, contract and obligation but had in return to pay special taxes.

After being raided several times by crusaders in the 12 th century, the Muslims finally surrender to Afonso Henriques, king of the recently established northern Christian reign of Portugal, at the Siege of Lisbon of 1147. The city, with around 154,000 inhabitants at the time, was returned to Christian rule. Nevertheless, the Muslim influence persists in present day Lisbon. For instance, Alfama, an old quarter of Lisbon has its name derived from the Arabic "al-hamma" (“The water source”) and modern Portuguese language still retains several words of Arabic origin, such as “oxalá” (from the Arabic “Insha'Allah”, meaning “God willing”) used when one wants to say “hopefully”.

The first Portuguese university was founded in Lisbon in 1290 and during the last centuries of the Middle Ages, the city expanded substantially and became an important trading post with both Northern European and Mediterranean cities. Later, during the 15th to 17th centuries, the numerous Portuguese expeditions of the Age of Discovery left from Lisbon and brought new dynamics to the city, both economically and culturally.

Meanwhile, the Christian rule had not completely eradicated the other religions present under the Muslims, Muslims and Jews were allowed to stay but only confined to ghettos (Judiaria for Jews; Mouraria for Muslims), which toponymy still exists in modern Lisbon. Until the 15th century Jews were very influential in Lisbon in terms of science (several physicians, astronomers and naturalists were jewish), finance and commerce, accounting up to 10% of total population.

Unfortunately, there was a growing animosity from the Christian majority towards the religious minorities, and during the 1500’s, the most prominent members of the Jewish community had fled to Moroccco and Turkey or to The Netherlands and Germany, and others converted to Catholicism to avoid persecution. It is now generally believed that the expulsion of Jews from Portugal was a huge error that contributed to the subsequent decline of Portugal and rise of The Netherlands as centre of European commerce.

Nevertheless, the 16th century was still Lisbon's golden era. The city was the European hub of commerce between Africa, India, the Far East and later, Brazil, and acquired great riches by exploiting the trade in spices, slaves, sugar, textiles and other goods. This period saw the rise of the exuberant Manueline style in architecture, which left its mark in many 16th century buildings including Belém Tower and Jerónimos Monastery (UNESCO World Heritage Sites). 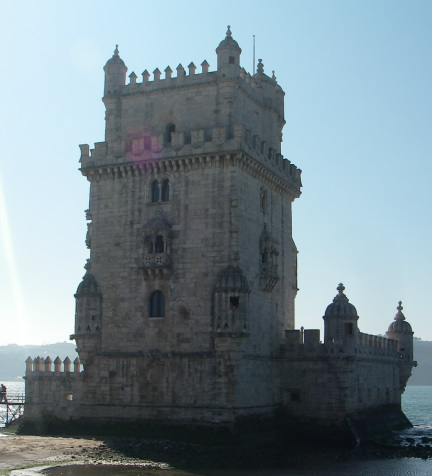 Belém Tower
Unlike any other European country, the slave trade caused a change in Lisbon demographics, since a fair number of Africans was brought to the city. Until the 18th century, when the import of slaves to mainland Portugal was forbidden, several tens or even hundred thousands people of African descent were brought to Lisbon. In its peak in the 17th century, about 5 % of Lisbon population could be made up of African slaves, but in the dawn of the 20th century, there were no significant traces of such population. They had blended into the local population.

After a succession crisis in 1580, and for 60 years, Portugal was ruled by same king as Spain, and Lisbon lost most of its power and importance to Madrid. At the time Lisbon was considered a possibility for the new capital of a kingdom resulting from the fusion between Portugal and Spain, but this idea was never really put in place. This period ended in 1640 with a coup d'état organised by the nobility and bourgeoisie in Lisbon that restored Portuguese independence.

In the early 18th century, the discovery of gold in Brazil gave a fresh impetus to the Portuguese Empire and allowed the King to sponsor the building of several Baroque churches and theatres in the city. 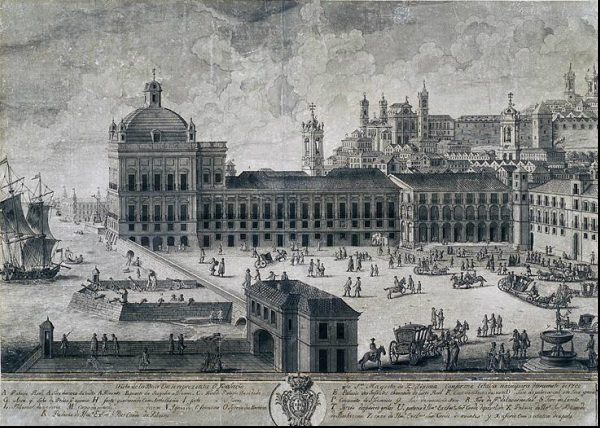 Royal palace and surroundings before the earthquake
By 1755, Lisbon was one of the largest and splendorous cities in Europe, but on 1 November 1755, the city was destroyed by a devastating earthquake, followed by a tsunami, which killed 30,000 to 40,000 Lisbon residents of a population estimated at 250,000 and destroyed a significant part of the city's buildings. Curiously, the earthquake left the oldest Lisbon’s quarter (Alfama) mostly untouched. The catastrophic event shocked the whole of Europe and strongly influenced the way of thinking (religiously, philosophically and scientifically) of the European Age of Enlightenment.

Carmo Church ruins were preserved as a memorial of the 1755 earthquake
After the 1755 earthquake, the city was rebuilt largely according to the plans of the king’s Prime Minister, who instead of restoring the medieval town, decided to demolish what remained after the earthquake and rebuild the city centre in accordance with principles of the modern urban design of the time and the money available (the country finances were severely damaged by the catastrophe). It was reconstructed on a meticulous grid plan with roads and pavements fixed at 40 ft wide with two squares in each extremity: Praça do Rossio and Praça do Comércio. The buildings, probably the first examples of earthquake-resistant constructions at a large scale in the world, were planned with a ground floor for commercial purposes and residential upper floors (up to 4 storeys high). However,the residential purpose was never fully achieved. At first, probably just for fear, despite the new earthquake-resistant construction, since the area had been the most damaged after earthquake, but even many years after, people just weren’t very enthusiastic for the idea of living there. Even nowadays the district has very few permanent residents. Being Lisbon’s commercial centre since those days, the district progressively went on further tertiarization with banks and insurance companies occupying whole buildings, and hotels and hostels gaining terrain in the last years.
In the first years of the 19th century, Portugal was invaded by the French troops of Napoleon Bonaparte and Lisbon was captured. Napoleon’s plan was to imprison the Portuguese royal family, forcing an abdication, and to crown one of his relatives as king of Portugal. However, in an unprecedented move, the royal family flee to Brazil and changed Portugal’s capital from Lisbon to Rio de Janeiro, turning Napoleons aspirations impossible. That period went from 1808 to 1820 and the escape involved more than 15,000 people. That episode gave a pretext for the subsequent independence of Brazil. By the time the King returned to Lisbon, many of the buildings and properties were pillaged, sacked or destroyed not only by the French invaders but also by the English supposedly allies on their way out.

During the 19th century, the city extended north along the Avenida da Liberdade, growing for the first time way from the Tagus River. On the early years of the 20th century the king was shot to death in the centre of Lisbon, an event that culminated two years later in the establishment of the Republic.

The first years of the 20th century were very unstable in Portugal, Lisbon witnessed political turmoil often with violence and that opened the way for an authoritarian regime of fascist inspiration in the late 20’s.

During the new regime (1926–1974), Lisbon’s population grew on account of migration of people from rural areas of the country and the city expanded further. The architectural current of the time, nationalist with some modernist architecture influence, aspired to build a new city with large avenues and monumental buildings and some of the older quarters like Mouraria (one of the most prominent birthplaces of Fado, the song of Lisbon) or Belém where levelled to comply with that purpose. During that time the two margins of river Tagus (Lisbon and the municipality of Almada) were connected for the first time by a suspension bridge, of about 1,5 miles long, resembling the Golden Gate bridge in San Francisco, USA.

During World War II, Portugal declared its neutrality, but in fact played a double game between Nazi Germany (the Portuguese government at the time had a strong fascist inclination) and England (Portugal’s oldest allied). Lisbon was one of the very few accessible neutral Atlantic ports in Europe, and became a major gateway for refugees to the U. S. and a haven for spies. More than 100,000 refugees, mostly jewish were able to flee Nazi Germany via Lisbon.

The so-called Carnation Revolution (technically it was a military “Coup d’Etat”) took place on 25 April 1974 mainly in Lisbon since it was the seat of power. It ended 48 years of right-wing authoritarian regime and reformed the country as the current democratic Portuguese Third Republic.

25 de Abril bridge connecting the two margins of river Tagus between Lisbon and Almada
In 1988, a fire in the historical district of Chiado destroyed several 18th century buildings and was a hard blow on one the most cosmopolitan of Lisbon neighbourhoods. A careful work restored the area back to its former shape and nowadays it is one of the trendiest Lisbon’s districts with up-scale shops, restaurants and hotels. 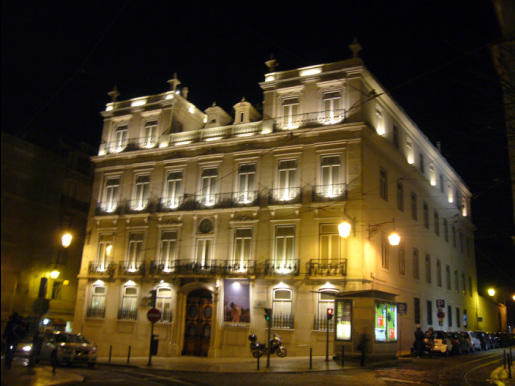 Chiado district
In 1998, twelve years after Portugal joined the European Union, a world Expo was the pretext to recuperate a forgotten area in the city, practically an industrial wasteland, in the margins the river Tagus. The Expo 98 was planned to leave infrastructures and buildings to allow the development of a new district. The “Parque das Nações” is a residential and leisure district with several examples of refined modern contemporary architecture from some of the best Portuguese and international architects. By the same time, and near by this new development, a new Tagus river crossing was build, an about 11 miles bridge, connecting this time Lisbon to the municipality of Montijo.